While pre production was over, my role most certainly was not. We had done some minor location scouting, but both my partner and I knew that my house was the perfect location for our film. The walls and furniture is all extremely neutral, and I happen to live on the water, which would make the final scenes easier to shoot, and added an additional interesting development that the aquaphobic Riley lived on the water. I liked what it layered onto the story, and the discussions about living with everyday fears that it could possibly raise in the viewer’s mind.

We spent about an hour going through blocking with our actor, and filmed the entire shot film in a handful of hours. I kept a copy of the screenplay with me so we could do on-site rewrites. This was the first time I had the opportunity to actually work with the actor, and while he had very early on in the process said he was willing to do anything, I wanted to make sure that still was true.

By the end of filming, much of the screenplay had been cut up and moved around. Some scenes that I had imagined one way turned out entirely different, and the narrative demanded that different scenes take precedence. I ruined many audio recordings and takes by interjecting when something didn’t go right, or when continuity was misstepped. I tried to make some notes in the screenplay about scenes we discussed so we could remember later.

Moving into post-production, I was rewriting the screenplay to convey the film we created. My partner and I had created a film that ran over our time limit, so we discussed where to pull from and what to leave in. I had to remove myself from the film, ignore the fact that it was my creation and something I was very defensive of, and look at it from a viewer’s point of view. What would I want to see, what things would I consider important? My partner and I agreed to take out part of the original ending, where water splashed on Riley and he began to show signs of panic. It ruined some of the ambiguity of the film, and would lead more viewers to just assume he drowned instead of thinking about it and deciding for themselves.

Due to the small size of our production team, I also served as sound designer. It worked in my advantage that I am an auditory learner, because I was listening to the script while I was writing it. I looked to places where I created tension for clues on how to design the film’s sound. Always wanting to bend the rules, I also decided to subvert what my instincts told me to do in some cases, partially to keep the viewer engaged and partially to see what it did for the narrative structure. One example is the photo album slamming. It marks Riley making a huge decision, and is the turning point in the screenplay. I heard a loud slam while reading the screenplay, but when I looked at the clip without sound, I liked it better. I left it completely silent. It is the only scene in the entire film that does not have any diegetic or nondiegetic noise in it.

Reflecting, I’m proud of what my partner and I created. I got to push myself in the way I tell stories. I like to create people with perfect lives, and present something to disrupt them and see how they react. By creating some one who already had a difficult everyday life, I had to think differently about how he interacted with his world. It made menial tasks far more interesting, and I had to find ways to make parts of everyday life engaging and highlighting how his phobia rules his life. I feel like the important questions about fear, how we react to it, and what that means for us survived the cuttings and rewrites. The plot, while not blood-pumping thrilling at all times, keeps a steady pace and, to me, nothing feels over-implied or rushed. I got to break some typical film conventions without losing sight of the story as a whole. We get to see a character naturally develop, and grow as his world places the demands on him. I’m proud of Drowning, and the story I have been able to tell with it.

Packet notes (find name of the book and author)

My first draft of the script wound up being what we used into production. I worked closely with my partner, who served as the cinematographer, director and editor, to make sure I created our vision. We conversed heavily about working with fear, and what films we liked that tackled fear. We limited ourself to one location and one on-screen actor. 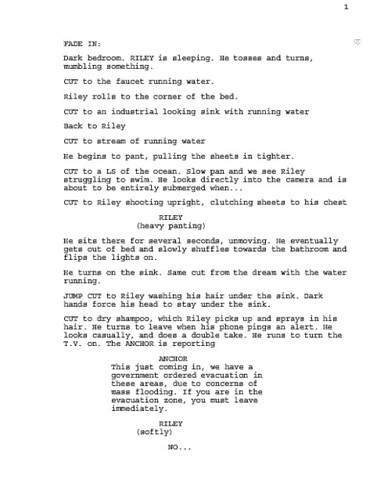 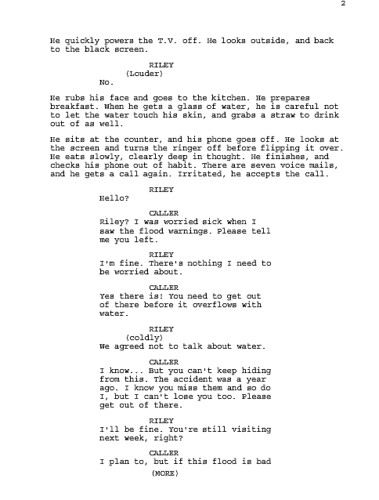 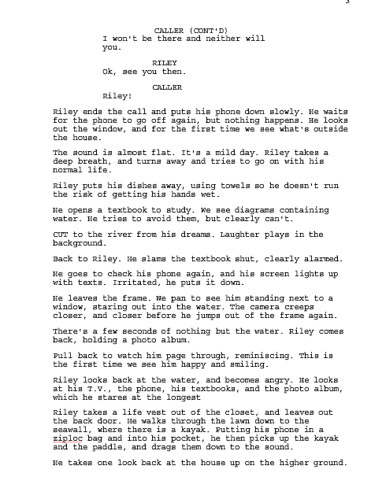 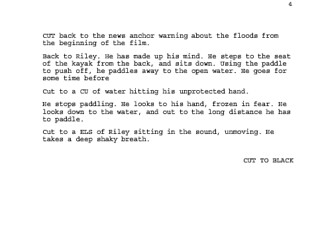 Riley, our main character, struggles with aquaphobia. This fear has taken over his life and controls nearly every action he takes. It gives him nightmares that wake him up, makes it difficult to commit to personal hygiene, and forces him to go to great lengths when he is thirsty. We see all of this within the first page of the script. His denial about his fear comes through when he refuses to acknowledge the flood warnings and his refusal to answer his friend’s questions when they call him. Ultimately, Riley has to be the one to pull himself out of the cycle. Reflecting over a family photo album, implied to hold photos of the loved ones he’s lost, Riley sizes up the room and has to make a choice for himself. His decision to go out into the water, that thing that holds so much terror over him, is his development and growth. While we are left without an answers to if Riley succeeded, we know he made the effort. He faced his fear, and took the control back.

A young adult’s aqua phobia proves to be a barrier when a pressing threat emerges.

The main character’s parents drowned in an accident, and he has developed a fear of water as a result. He can recognize that water is an essential part of his life and that he needs to continue to drink it to survive. However, he cannot stand the feeling of it on his skin, leading him to find alternative methods to living his everyday life. He lives in his parent’s former house, and is studying biology. He lives deep in denial, and  refuses to have conversations about water.

The most important part about Riley was showing how neutral everything around him was. We picked a neutral location to shoot at, where everything from the walls to the floors to furniture lacked any color. Everything was black, white or gray. Riley himself wears a white shirt. The color is drab and neutral, signifying the passivity and the lack of want for change or progress. The main color that is featured is yellow. Whenever Riley is batteling his aquaphobia, yellow can be found. There’s a yellow pillow when he wakes up from his dream, the shampoo he almost uses is yellow, and the kayak he gets into at the end of the film is also yellow. Yellow, while normally signifying happiness, also has strong associations with fear and sickness, as we have the phrase “yellow-bellied” to signify a coward and the fact that yellow puss can signify a grave illness.

My biggest struggle was getting into Riley’s head and finding out what would motivate him. It was easy to create a character with fear, as fear is a very human emotion and personal to every one of us. I did not know what it would take for Riley to overcome his fear. My partner and I discussed back and forth, trying to figure out what it would take for us to face a fear as great as his, until it hit me. We were trying to have other people save Riley, when he needed to save himself. He could look at the photo album and reflect on happy memories, but ultimately it had to be his choice to try to change.

The most important thing I learned, in my opinion, was how to use Adobe Premier. I previously was only trained in iMovie, and I found the Premier program to be far easier to manipulate my end product, although I still prefer GarageBand for soundtrack editing. I also became familiar with the class’s sound recording system, where previously I was clueless on how to operate it. This project is the first time I really feel like I am comfortable with production in the film process.